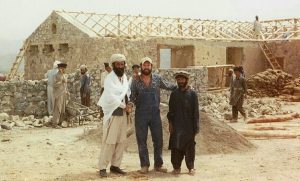 Ronny Sweger joined the Army in 1993, and as a Special Forces engineer, was deployed countless times over his 14 years of service. Serving all over the world, from Africa, to Iraq, to Afghanistan, the former Green Beret said coming home after an honorable discharge and medical retirement in 2009 meant that he shut most of the world out for a time.

The 44-year-old Bixby, Oklahoma resident says it was only when he looked at his young sons that he realized he needed to be a leader and set an example for others who might be experiencing similar struggles. Teaching a sniper class for an old buddy he’d served with, Ronny’s volunteer service back stateside evolved into what is today The Foundation for Exceptional Warriors. Known as The FEW, Ronny co-founded the organization in 2012 to encourage healing and connections through outdoor adventures to underserved veterans who risked their lives for their fellow countrymen. As Ronny explains, while there is ample funding for organizations supporting injured veterans, there is a void when it comes to the heroes among us, some with dozens of deployments under their belts: Special Operations Forces, Ex-Prisoners of War, Purple Heart recipients and those recognized with awards for Valor, that don’t receive the support back at home that those wounded in combat often receive.