Community dedication comes to the forefront when Oak Hill Marina staff start looking at the coming year’s calendar. Many of the dealership’s year-round events are organized with the goal of raising money for entities and organizations in need.

Marina staff joined forces with the Foundation for Exceptional Warriors for a new June event that provided a unique getaway for veterans and their families.

“We truly are a dealership that’s in the business of lending a helping hand,” says Tim Sather, co-owner. “We volunteered to sponsor 10 warriors and their families to vacation in Okoboji for a weekend.”

The warriors and their families arrived on a Friday afternoon and were provided with two nights at a resort with a water park. 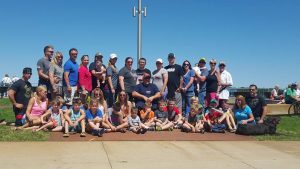 That evening, a large boat was rented and dinner was provided as the families got an on-the-water tour of the Iowa Great Lakes. The next day, they were served a breakfast and lunch donated by local businesses. They were also given passes to the local amusement park, miniature golf course, and candy store.

Oak Hill held its annual Customer Appreciation Party, where a supper was provided for the warriors, their families, and 1,000 loyal customers.

A post-concert supper featured Casey Muessigman, a local participant on “The Voice” and country music stars LoCash. The concert was attended by Oak Hill customers and 9,000 other concert-goers at no charge.

The warriors and their families were taken fishing. Some chose to relax and cruise the area, while others wanted to tube and ski.

Throughout the weekend, a variety of fundraising activities raised additional money for the Foundation for Exceptional Warriors.

“The weekend spent with the warriors was emotional and rewarding. They were so thankful for what Oak Hill Marina had done for them and their families,” says co-owner Jake Jostand.

Oak Hill’s event calendar gets rolling early in the year with a Winter Games Festival that raised money for the Arnolds Park/Okoboji Underwater Search & Rescue.

More than 2,500 festival-goers ventured into a large tent for free food and drinks. In March, marina staff held a one day event during the March Madness Tournament called March Mania. This event gets people thinking about boating again as spring approaches, and is based on a basketball theme.

Spring Splash is an annual event held each April to get current and potential customers in the marina before the official boating season kicks off.

“During the month of June we hold an event called ‘Wake the Spirits’ on Big Spirit Lake,” Sather says. “For this event, we take several boats and hold a boat show in a park on Big Spirit Lake. Boat demos are offered that day along with lunch.” Oak Hill employees hand-deliver flyers to 500 lake residents prior to the event.

Wakeboard Wednesdays and Surf Thursdays occur during July. Oak Hill employees take five surfers out in the morning during calm waters and provide practice runs behind a MasterCraft and provide instruction to better each participant’s skills.

Twice a year Oak Hill employees donate their time to deliver Meals on Wheels to local elderly and shut-in residents.

“We enjoy the chance to visit with them and know they appreciate the meal land company,” Jostand says.

Throughout the school year, Oak Hill hosts fundraiser tailgate parties for the Okoboji Schools. A meal is served at a football game in the fall and a basketball game during the winter.

“Each year we wrap up with a community food drive around Thanksgiving,” Sather says. “All food donated and collected is given to Upper Des Moines Opportunities to assist low income families during the winter months.”