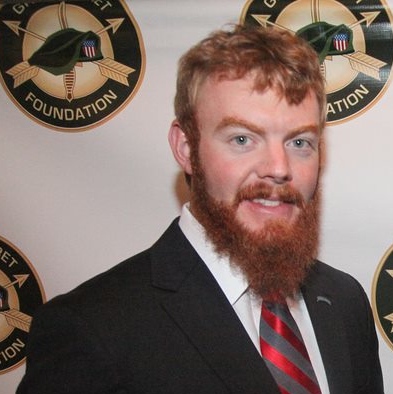 I was in for 8 1/2 years and a day according to my DD-214. I came in as a 13B (cannon crew member). They wouldn’t let me go into the infantry because of a skateboarding accident, which left me with retained hardware in my right Tibia. Spent OIF 3 (operation Iraqi Freedom) with the 3ID (3rd Infantry Division) and returned wanting to be around a more free thinking group of people.

So I went to selection a few months after getting back and upon completion was given 18E (communications) and Mandarin Chinese. Why they thought a ginger should learn Mandarin is beyond me but that’s what I wanted! After training I went to ODA 195(Operational Detachment Airborne), which is now 1335. Broke my leg again a couple of weeks after getting to the team which set me back on going to schools and a portion of my companies OEF (P) (Operation Enduring Freedom- Philippines) rotation. I did manage to make it down there halfway through the rotation after getting back on my feet.

Came back and geared up to train the MNDF (Maldivian National Defense Force). Which was the best 6 weeks I was ever sent to endure! After returning from that trip a couple months later I was sent to SOTACC (Special Operations Terminal Attack Controller Course). Even in October Yuma is ridiculously hot! Upon completion I returned to find out our initial timeline for our Afghanistan rotation.

As a usual Special Forces Rotation was 6 months when I came in, my last trip conducting VSO (Village Stability Operations) had me there for 11. I guess you could count being on the PDSS (Pre-Deployment Sight Survey) as a full year!

All in all I wasn’t deployed too much during the duration of my career. If I had the chance to go back and change it I wouldn’t.