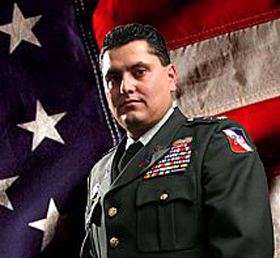 Major Pulido is also the Sr. VP of the Folds of Honor Foundation a Veteran’s charity which provides the spouses and children of the fallen and wounded educational scholarships. Additionally, he is a Founding member of the Warriors for Freedom Foundation a leadership institute focused on the mental, physical and wellness support of our wounded Veterans and their families. Additionally, Major Ed is the Founder of Warrior Nation, a movement focused on the rights of liberty, freedom and patriotism with an autobiography entitled Warrior for Freedom: Challenge, Triumph and Change, the Major Ed Pulido Story. Finally, he is the spokesperson for Acadia Health Care.

During his 19-year military career, Major Pulido hit an Improvised Explosive Device (I.E.D) or roadside bomb on the 17th of August, 2004,while serving in Iraq. Due to the extensive injuries to his left knee, doctors had to amputate his left leg on October 1, 2004. On May 16, 2005, he was medically retired from the United States Army.

Major Pulido has excelled both in and out of the military.

For his heroism and valor on that August day when he was wounded, the President of the United States along with General David Petraeus awarded him the Bronze Star, Purple Heart, Meritorious Service Medal, and Joint Service Commendation and Achievement Medals.

Major Pulido has a degree in Military Science, Marketing, and Criminal Justice and a Masters Degree in Logistics Management/ Human Relations.

On May 16, 2005, the Army lost a great leader and Warrior when he was medically retired from the United States Army. Today,  Major Pulido sets the example for supporting Veteran’s aftercare.