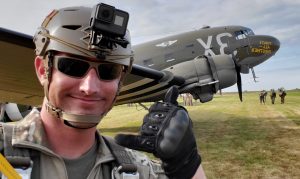 From Fort Drum, Adam deployed to Iraq for 13 months from 2003-2004 , there he supported the Infantry with fire and air support on counter-insurgency operations in Iskandariyah and Habbaniyah, and worked with Civil Affairs units from both the Marine Corps and National Guard to build local security and police forces.

His next deployment in 2006 took him to Afghanistan. Originally deployed to the area of Khogyani, his company was then moved to the austere Korengal Valley to support operations there to attempt to quell the very active anti-coalition forces in the region. In August 2006, his patrol of 13 men was surrounded and ambushed by a numerically superior force in which he was wounded and recognized for Valor. His wounds lead to his medical retirement.

Adam has since become involved with The FEW, first organizing events as an Associate, working and volunteering his way to become the Director of Operations. For his works he has received the President’s Volunteer Service Award.